By clicking “Accept”, you agree to the storing of cookies on your device to enhance site navigation, analyze site usage, and assist in our marketing efforts. View our Privacy Preferences for more information.
DenyAccept 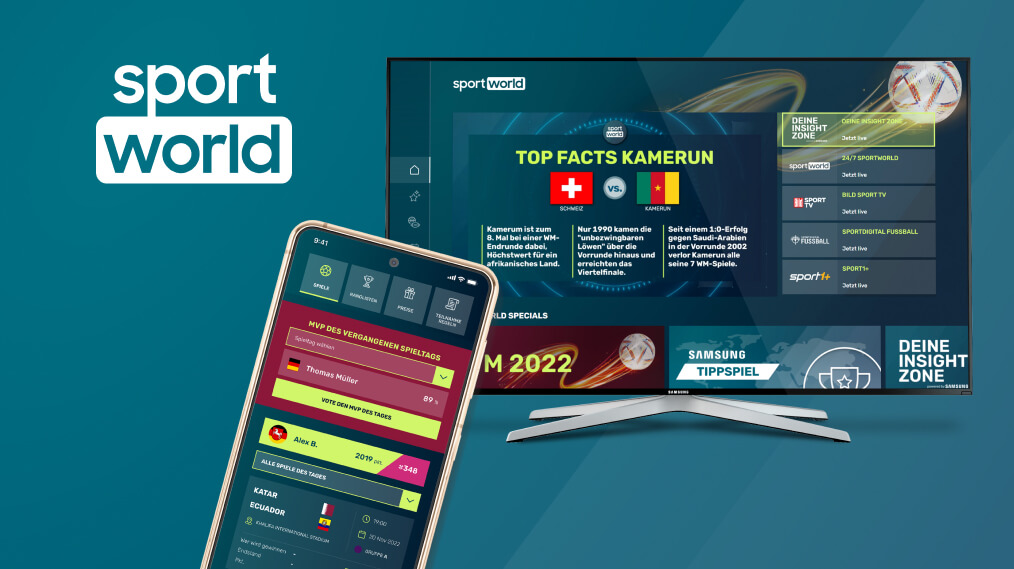 Munich. During one of the world's biggest sporting events, Sportworld users will find the central place to go for World Cup content on the Sportworld app.

During the World Cup, B1 SmartTV’s Sportworld app offers to sports fans centralized access to all live matches of the World Cup. The enhanced EPG (Electronic Programme Guide) is sourced from over 35 sports broadcasters. This gives users an overview of all upcoming sports events.

INTERACTIVE PREDICTION GAME WITH PRIZES WORTH UP TO EUR 40,000

During the World Cup, Samsung customers can look forward to exclusive additional features such as the "Samsung Prediction Game". Participants have the chance to place their predictions daily and win valuable prizes worth up to EUR 40,000.

By placing their predictions, users collect points which are calculated on the basis of probabilities. As a result, the prediction experience becomes even more real and exciting. For each match, Sportworld users place their prediction on the outcome of the match (win, draw, loss) as well as on the exact result.

The amount of accumulated points determines the position in the community rankings, which determine the eligibility to win.

Thus, the winner of the “Samsung Prediction Game” will receive a Samsung Device Bundle consisting of a Samsung 65-inch 8K Smart TV, a Galaxy Z Flip4Fold smartphone and a 6-month voucher for the "Samsung Sport Package". The “Samsung Sport Package” provides Sportworld users with a direct access to 12 Pay TV channels such as the new OTT-channel BILD Sport TV, SportdigitalFUSSBALL or SPORT1+.

In addition to the prediction game, Samsung customers also receive innovative additional content. The channel "YOUR INSIGHT ZONE– powered by Samsung" shows the most important stats and facts about the matches. Sportworld users receive relevant match statistics such as "Head toHead" comparisons before and after the matches. During the matches,"YOUR INSIGHT ZONE" becomes the perfect second screen event as real-time data is used to classify and enhance the current gameplay. Selected clips from the channel will be made available as watchable VoD clips on the Sportworld app.

Just in time for the start of the tournament, the new OTT channel "BILD Sport TV" was launched as part of the "Samsung Sport Package" and provides Sportworld users with attractive World Cup programs during the WorldCup. At the same time, B1 SmartTV launched a new app version of the Sportworld app for Samsung Smart TVs. This enables Sportworld users to immerse themselves in emotional content worlds, as Gerd Weiner, Managing Director at B1SmartTV, confirms:

SPORTWORLD AS PART OF THE SAMSUNG PROMOTION CAMPAIGN "ALL MATCHES,ALL GOALS”

With its exclusive features for Samsung customers, Sportworld is part of Samsung's current nationwide campaign "All Matches, All Goals”. Anyone who purchases a Samsung promotional device will receive the "Samsung Sport Package" in the Sportworld for up to 12 months - depending on the model category - as well as a voucher for Magenta TV - free of charge.

B1 SmartTV develops innovative Smart TV as well as Mobile apps with intuitive usage and smart capabilities of both interaction and transaction. Patented technologies enable latency-free interaction between Smart TV and smartphone. Thus, users are provided with an entirely new content experience. The new version of the Sportworld app on Samsung Smart TVs and all iOS& Android smartphones satisfies the diverse needs of sports fans by aggregating the variety of sports and sports providers on one platform and enabling users to experience them in one place.